I’ve got too much going on to post something fresh today.  So, here’s something from the archives: a reminder for those pinning their hopes and the hopes of the world on the next president.

LUKE 2:1 In those days Caesar Augustus issued a decree that a census should be taken of the entire Roman world. 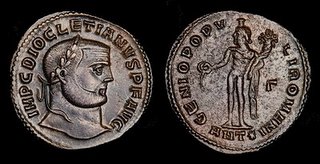 Augustus.  Born Octavius, adopted son of Julius.  Heir to the throne of the great Roman empire.  Julius was so proud of his boy, and himself, that he forged a coin in Gaul, distributed across the empire, to honor them both.  On one side, the face of Julius.  On the other, the face of Octavius.  Written across both were the words, “Divine Caesar and the Son of God”.

Powerful men are often in love with themselves.  That’s nothing new.  Megalomania is as common among the famous as flies among the poor.  But few call themselves gods.  And Julius wasn’t the only one adoring himself and his offspring this way.  Emperor worship was the national religion, most fervent in Asia minor where the greatest number of Christians, followers of a rival Jewish king, would one day lose their lives for refusing to honor Caesars and their empire.  Julius was a god to his people.  A full fledged god.  Capable, so they thought, of controlling the earth below and the sky above, capable of creating and sustaining their very lives,

But his own life wouldn’t last forever.  And when Octavius ascended his father’s throne he dubbed himself “Augustus.” Not the humblest of names.  No, Augustus means “worthy of reverence and worship.” Like his father, Augustus reigned as god over his kingdom.

Until 17BC, when a strange star appeared in the sky.  The great Roman thinker and writer Virgil interpreted the sign for him.  “The turning point of the ages has come.” Utopia is on the horizon, the dawning of a new and great era has arrived, through the great Augustus.

Now, there were shepherds watching their flocks and an angel appeared to them with a different interpretation. (LUKE 2:10-11) “Do not be afraid. I bring you good news of great joy that will be for all the people. Today in the town of David a Savior has been born to you; he is Christ the Lord.”

This was the day the Jewish prophet Isaiah had written of, the day power changed hands on earth.  “For to us a child is born, to us a son is given, and the government will be on his shoulders. And he will be called Wonderful Counselor, Mighty God, Everlasting Father, Prince of Peace.” (Isaiah 9:6)

“Government.” Power.  Rule.  Not a system.  Not a senate or an office.  The ultimate authority.  The right to reign.

“On his shoulders.” Passed on.  Bestowed upon.  The power and position that Caesars believed they held, that dictators crushing the Jews for centuries wielded, the authority and control exercised by mere mortals sitting on thrones inherited from Fathers and Mothers – this mantel is handed to a child heralded by the night sky Caesar claims to conduct.

A new King.  A new kingdom.  The kingdom of God lying in a manger, growing in Nazareth, learning from the rabbis, wearing his prayer shawl, preaching in the synagogue, “”The Spirit of the Lord is on ME, because He has anointed ME to preach good news to the poor. He has sent ME to proclaim freedom for the prisoners and recovery of sight for the blind, to release the oppressed, to proclaim the year of the Lord’s favor.” (Luke 4:18-19)

Revolution has come to a manger, come through a Jewish rabbi born to a virgin in the Middle East.  And an empire, a god, a savior, is overthrown.  A new kingdom for the poor of spirit, the mourning and the quitters that would outlast the reign of all Caesars has come.

So great would the Christ’s influence be that one man, a follower of his named Peter, would announce, “Salvation is found in no one else, for there is no other name under heaven given to men by which we must be saved.” (Acts 4:12) Peter.  A revolutionary like his Master.  What a rebellious pronouncement he made.  Rebellious?  Yes.  For before Peter ever spoke these words about Christ, Augustus had written them about himself on Roman coins, “ Caesar Augustus.  There is no other name given to men by which we may be saved.” Peter reminded us all, for all times in all nations, that only Christ saves the oppressed, the sick and the sinful.

What the nativity scene dimly lit on our mantles fails to capture for us is the defiance, the seditiousness of the Christ Peter knew well.  The placid figurines leave us wondering why anyone would want to kill this precious child.  Remember though.  Asleep on that hay is the King of kings come to do through his people what no Caesar could, come to bow every knee, erase every border, destroy every flag, save every soul, free every captive, feed every stomach, open every eye, right every injustice – and do so by giving up His own life, not by taking another’s.

3 comments on “And The Government Will Be On His Shoulders”