As the sun set on the middle ages a new generation of Just War thinkers rose to prominence, seeing the world through a new lens their predecessors never accounted for: colonialism.  It was the sixteenth century and Columbus sailed the ocean blue, bringing Mother Spain’s armed conquistadors with him and firmly wedging Just War proponents (which was the entire Catholic Church) between a proverbial rock and hard place.  Or, more fitting, between a spear and a sword. 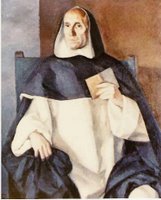 ”More than any other individual [Francisco de Vitoria] served to recast the medieval just-war consensus for the dawning of the modern age.”(1) De Vitoria thought beyond mere rules for engagement and “set forth foundations for international law not only for Christendom but for the whole world.”(2)

de Vitoria revised Just War thinking by admitting there are ties in warfare.  He didn’t call them that but that’s what he meant.  In the case of the conquistadors versus the natives, for instance, he wrote that the world is a human community with certain rights given to all people.  Among those rights is the ability to go anywhere one wishes, trade anywhere one wishes, as long as one does not intend to harm anyone in the process.  So the Spanish had a right to settle in the New World.

But he also reasoned that even IF the conquistadors were innocent travelers (I doubt it) the unsophisticated inhabitants of the New World may not perceive them as such. The natives could view any visit by different looking folks as hostile, as something to fight against – justifiably – especially if they’re carrying sharp pointy things.  So the natives were right in defending themselves against what they saw as an attack, thought de Vitoria.  And the Spaniards were then right to fight back in defense of themselves.

Basically, two sides of a conflict could view the conflict differently and, when applying the Just War theory, each could rightly (given their perception of things) reach the conclusion that they are the good guy and are just in waging war against the bad guy – who also thinks he’s the good guy.

So what’s a Just War theorist to do in a world where good and bad guys are not so easily sorted out any more?  De Vitoria decided that instead of weighing jus ad bellum (WHY we’re going to war) and jus in bello (HOW we war) equally in such instances, nations should place more emphasis on jus in bello (HOW we war).  In doing so de Vitoria shifted the primary ethical problem away from whether or not we have definitive justification for going to war and towards the rules of engagement, how we will win now that we are at war.

And that’s how half of the Just War theory became more important than the other.  In time wars could be justified AFTER they began instead of before.  Justified by HOW they were fought and not WHY they were fought.  Wars would sometimes be called “just” not because the cause of war was determined to be so but because the scope of violence was limited, the enemy was not tortured, property was not damaged unnecessarily and innocent citizens were not slaughtered.