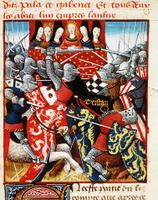 Picking up where we left off with Augustine and Aquinas, the next major development in the evolution of Just War doctrine was chivalry – the code of conduct followed by the knights of the Middle Ages.  Chivalry imposed upon warriors a set of regulations for the conduct of war(1).  Since knights did not declare wars but simply fought them, chivalric code sheds no light on just cause for declaring or commencing a war but only how one is to be justly fought by soldiers once declared.

For instance, the code of the knights sought to end unrestrained violence by prohibiting certain acts such as attacking noncombatants.  And this is possibly the greatest contribution the knight code of chivalry made to the development of Just War thinking.  With chivalry the only legitimate target of an attack was considered by the knights to be another armed warrior.(2)

Theologians like Aquinas or Augustine mapped out the do’s and don’ts of just cause and declaration of war hoping to avoid placing their souls in peril by erring and acting unjustly.  But the knights concerned themselves with the rules of just combat for reasons having nothing to do with the soul or religion.  Their motivations centered around personal honor and material gain.  “Stated succinctly, it appears that knights had two important reasons for guaranteeing the protection of noncombatants.  First there was NO GLORY in armed combat with a nonknight, for knights were professionals. Secondly, noncombatant serfs, peasants, artisans, and merchants were the SOURCE OF WEALTH for the knightly class.”(3)

“But the knights concerned themselves with the rules of just combat for reasons having nothing to do with the soul or religion.”

Doesn’t that strike you as an oversimplification? Human beings are complex creatures. I have a tough time believing that knights developed their rules for avoiding combat with civilians, women and children without any concern for their souls or the inherent justness of their actions in God’s eyes.